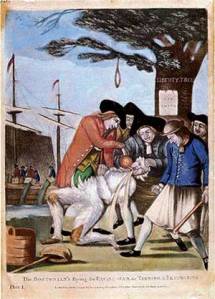 In this month’s episode, Ken Owen, Michael Hattem, Roy Rogers, and Liz Covart discuss popular protest in early America, including the moral economy of the colonial period, the Stamp Act riots and the development of protest during the imperial crisis, and Shays’ Rebellion and the Whiskey Rebellion in the early republic.

American popular protest has a long tradition going back into the colonial period and beyond. Colonists brought over traditions of popular protest from England that were transformed in the colonial period. During the imperial crisis, colonists protested in large numbers, whether through violent riots or more organized protest campaigns. After the war, this tradition continued with Shays’ Rebellion and the Whiskey Rebellion and was drawn on by the important social movements of the nineteenth and twentieth centuries, including abolitionism, women’s rights movements, and the African-American and gay civil rights movements.

Liz Covart is an independent historian and host of the Ben Franklin’s World podcast. She received her PhD from the University of California at Davis, where her dissertation focused on imperial and national identity in revolutionary Albany. Liz blogs at Uncommonplace Book and writes for a number of online history websites and publications. She also offers social media consulting services for writers.

Holton, Woody. Unruly Americans and the Origins of the Constitution. New York: Hill and Wang, 2007.

Maier, Pauline. From Resistance to Revolution; Colonial Radicals and the Development of American Opposition to Britain, 1765-1776. New York: Alfred A. Knopf, 1972.

The JuntoCast is a semi-monthly podcast about early American history. Each main monthly episode features our roundtable of academic historians exploring in depth a single aspect of early American history. In between our monthly episodes, we also release episodes of The JuntoCast Extra!, shorter episodes that explore a specific topic or question from the previous episode. We are committed to bringing the knowledge of academic historians to a general audience in an informal, conversational format that is both educational and entertaining.

My Tweets
My Tweets

This work is licensed under a Creative Commons Attribution-NonCommercial-NoDerivatives 4.0 International License. Each contributor to the blog retains the rights to their own individual contributions. If you would like to use any content in full, please email us at: thejuntocast [at] gmail [dot com].