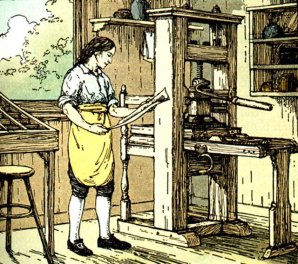 Ken Owen, Michael Hattem, and Roy Rogers follow episode 19 on “print culture” with a discussion about printers in early America, including the fiscal and political challenges of being a printer, their role in curating and circulating information, and how the occupation changed after the Revolution.

Serving as the primary circulators of relatively scarce and important information, printers played an important role in early American culture, politics, and economics. Unlike the eighteenth-century America’s most famous printer, Benjamin Franklin, however, most printers struggled to make a living while also having to navigate the shark-filled waters of colonial and revolutionary politics. Through the Revolution and beyond, printers increasingly became content creators rather than just curators and, at the same time, were more willing to engage in politics directly. By the early nineteenth century, party newspapers were becoming more and more common and printers played an important role in the organizing of national party politics on the local and state levels.

Thomas, Isaiah. The History of Printing in America: With a Biography of Printers, and an Account of Newspapers. Worcester: 1810.